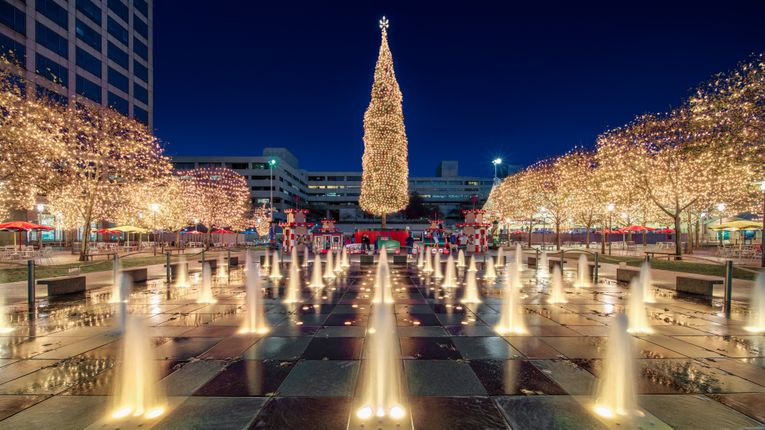 HISTORY: Crown Center is a mixed-use redevelopment project, one of the earliest in the nation, filling an 85-acre site adjacent to the international headquarters of Hallmark Cards, Inc. It has been a catalyst for change in the city’s urban core, replacing blight with quality working, living and entertainment facilities to breathe life back into the city. Crown Center is the result of the vision of Hallmark’s founder, the late Joyce C. Hall, and his son, current chairman Donald J. Hall, to replace the rutted parking lots, abandoned warehouses and remains of failed businesses. Ground was broken in 1968 on the first projects, a five-building office complex, a central square and a parking facility. The Crown Center Shops, The Westin Hotel and The American came next, followed by residential, a second hotel and more office buildings. Today, Crown Center thrives as a place where people live, work, play and stay.

WHERE TO GET LUNCH: Eating options range from the moderately-priced Fritz’s Railroad Restaurant—where meals are delivered by miniature train—to local favorites SPIN! Neapolitan Pizza and Unforked.

WHAT’S NEARBY: Union Station and the National WWI Museum & Memorial.

From the east: Take I-70 West to Locust Street/Truman Road. Turn left on Grand Boulevard and continue to Crown Center parking.

PARKING: Parking is free for the first three hours with validation in the Crown Center Shops garage, 2450 Grand Blvd., and weekend parking is free.