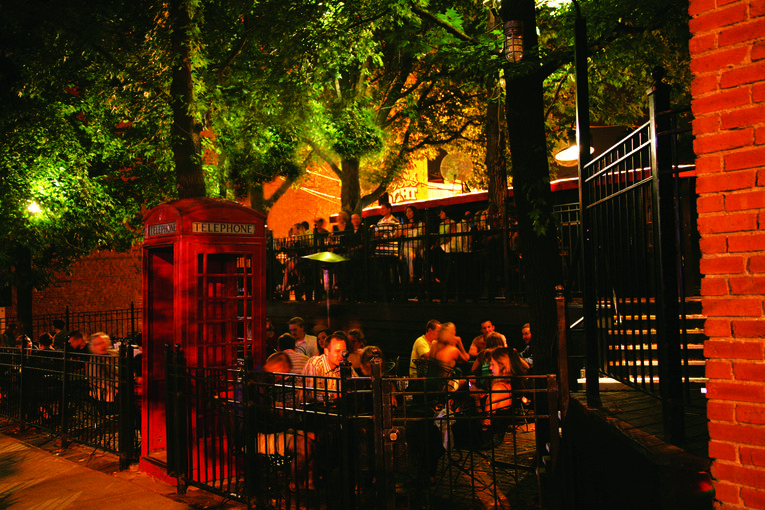 HIGHLIGHTS: Westport is known as one of Kansas City's main centers of entertainment and nightlife. The neighborhood is home to a number of restaurants and bars, including Kelly's Westport Inn, an Irish-themed bar located inside the oldest building in Kansas City. Kelly's inspired the main set of Malcolm & Eddie, a TV sitcom starring Eddie Griffin and Malcolm-Jamal Warner. Westport has a lively music scene, with several venues for live musical entertainment.

HOURS: The Westport district is an active neighborhood 24 hours a day. Most bars and restaurants are open until 3 a.m. Check with individual merchants for specific hours.

HISTORY: Westport was first settled by Reverend Isaac McCoy and his family in 1831, along the Missouri River. It was platted three years later, and formally incorporated in February1857. Isaac's son John Calvin McCoy is generally considered the "father of Kansas City" after he formally founded the town and then got his supplies from a rocky point on the Missouri River between Grand and Main Street that later became known as "Westport's Landing." When the landing became popular, young McCoy and other residents banded together to form the "Town of Kansas" company to buy the land.

The community thrived during the mid-1800s as an outfitter for migrants traveling any of the four now-historic trails (Oregon, California, Santa Fe and Lewis & Clark) which went through the area.

After the Kansas-Nebraska Act of 1854 and the Civil War, Westport's role as the starting point for migrants slowly declined, even as nearby Kansas City grew. It was annexed by Kansas City in 1897.

WHERE TO EAT LUNCH: With most of the 30 restaurants, 25 bars and 15 patios located within walking distances, there’s definitely no shortage of unique cuisine in Westport. Many restaurants, such as Cancun Fiesta Fresh, Mario’s Deli and Joe’s Pizza, are open for quick lunches; or sit down with friends and co-workers for lunch at Californos, McCoy’s Public House, Port Fonda and Jerusalem Café.

WHAT’S NEARBY: The Country Club Plaza is a five-minute drive south, and both the Kemper Museum of Contemporary Art and The Nelson-Atkins Museum of Art are within a few miles.

ANNUAL SPECIAL EVENTS: Kansas City's Annual St. Patrick's Day parade has made its mark as one of the largest and most notable parade celebrations of all things Irish in the United States.

An annual art festival in September, Art Westport brings together more than 100 local and regional artists and craftsmen in an atmospheric open-air environment.

DON’T FORGET: Catch a flick at Tivoli Cinemas, a theatre in Westport that showcases small-budget, independent films as well as provocative documentaries.

From the south: I-35 North: To Shawnee Mission Road, East. Continue for about 10 minutes. After passing State Line Road, stay to the left with Ward Parkway traffic going east. Turn left on JC Nichols Parkway, which turns into Broadway Street and take that north a couple blocks to Westport Road.

PARKING: Most parking lots are free.