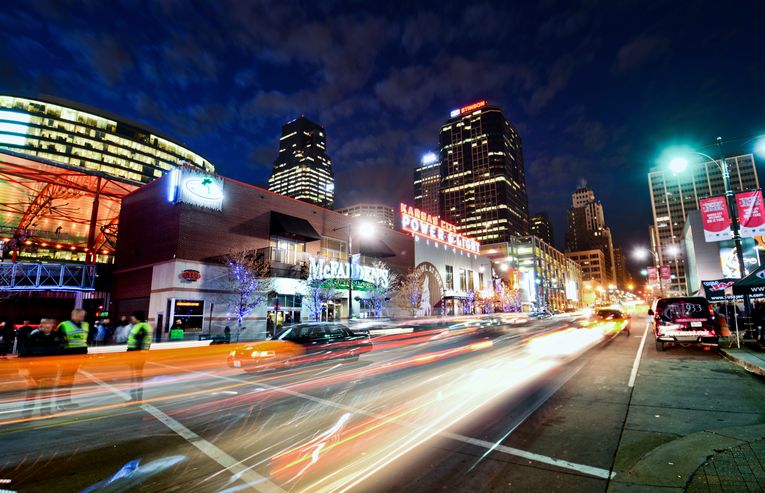 LOCATION: Heart of Downtown, between Grand Boulevard and Baltimore Avenue, and 12th Street and Truman Road.

HOURS: The Kansas City Power & Light District is an active neighborhood. Most bars and restaurants are open until 3 a.m. Check with individual merchants for specific hours.

ADMISSION: Most events are free. Events held at individual venues may have different restrictions and charges.

HISTORY: Developed in partnership with the City of Kansas City, Mo., and the Kansas City Economic Development Council, the first phase of the Power & Light District was completed in spring 2008, totaling approximately 425,000 square feet of retail, dining and entertainment space with an investment of $330 million. Upon completion of the second phase, the $850 million district will also contain 1,500 residential units and approximately one million square feet of office space. One Light Luxury Apartments, the first of four high-rise apartment buildings planned for the Power & Light District, opened late 2015, and Two Light Luxury Apartments opened in May 2018. The addition of these residential units in the Power & Light District builds on Kansas City’s forward momentum in growth and revitalization and has set the new standard for luxury urban living in the region.

The Power & Light District was developed by Baltimore-based The Cordish Companies, one of the largest and most respected developers in the world with extensive expertise in almost every discipline of real estate, including entertainment and mixed-use developments, sports-anchored developments, shopping centers, corporate office, residential/student housing, and gaming & hospitality developments.

WHAT’S NEARBY: T-Mobile Center arena is across the street from KC Live! and the Kansas City Convention Center is within walking distance.

DID YOU KNOW: When it opened, the $850 million entertainment district was recognized as the largest new development project in the Midwest.

DON’T FORGET: Visitors must be 21 or over and possess a valid ID for entry to the KC Live! area past 9 p.m. on Thursdays, Fridays and Saturdays.

PUBLIC TRANSPORTATION: Enjoy the KC Streetcar for free transportation from Union Station, with stops through the Power & Light District and on to the River Market.

PARKING: The District and the City have multiple parking garages and surface lots within and surrounding the District. Parking is available all day, every day in the KC Live! parking garage ($3 with validation from any Power & Light District venue).