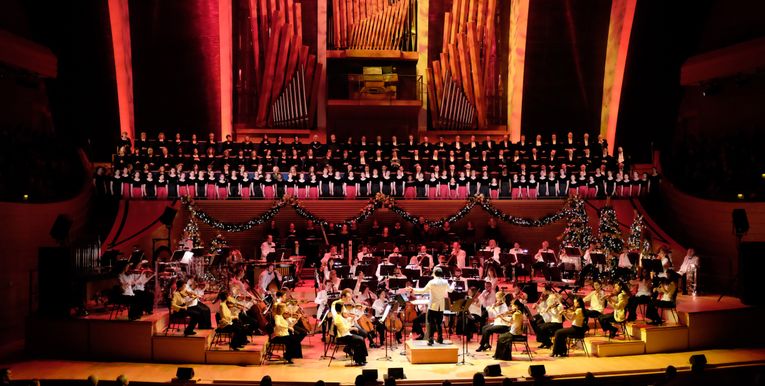 DESCRIPTION: Founded in 1982, the Kansas City Symphony is a major force in the cultural life of the community. Praised for performances of uncompromising standard, the orchestra is the largest in the region, with 80 full-time musicians, and enjoys a national reputation under the artistic leadership of Music Director Michael Stern. The Kansas City Symphony Chorus is a volunteer, 160-member ensemble led by multi-Grammy® Award-winning conductor, Charles Bruffy, that continues its long tradition of excellence as the choral voice of the Kansas City Symphony. Presenting more than 100 concerts annually in a 42-week season, the Symphony also performs for the Kansas City Ballet and Lyric Opera of Kansas City. Every season comprises an impressive variety of programs that collectively reach more than 250,000 people, including the Symphony’s annual Bank of America Celebration at the Station concert held each Memorial Day weekend. For more information or tickets, visit kcsymphony.org or call (816) 471-0400.

HISTORY: Founded by R. Crosby Kemper, Jr., in 1982, the Kansas City Symphony has established itself as a major force in the cultural life of the community. Praised for performances of uncompromising standard, the orchestra is the largest in the region and enjoys a national reputation under the artistic leadership of Music Director Michael Stern.

WHERE TO GET DINNER: The Kauffman Center for the Performing Arts is located next to several great dining options to enjoy before the show. Grab drinks at The Kill Devil Club in the Kansas City Power & Light District, or enjoy an authentic Italian meal at Lidia’s, located in the Crossroads Arts District.

WHAT’S NEARBY: Union Station, the Crossroads Arts District and the Kansas City Power & Light District are all less than five minutes from the Kauffman Center.

ANNUAL SPECIAL EVENTS: The Bank of America Celebration at the Station is a free concert held each Memorial Day weekend at Union Station. This is the largest free Memorial Day weekend event in the Midwest with an exciting fireworks display at the end of the performance.

Pops in the Park celebrates Labor Day with familiar classics at The Theater in the Park, located inside of Shawnee Mission Park. This family-friendly event is free to all ages.

DON’T FORGET: Check out the Symphony’s six CD recordings or listen to clips at youtube.com/kcsymphony.

GROUP TOURS: Public and private tours of the Kauffman Performing Arts Center are available with advanced reservations. Tours are approximately 60 minutes in length and led by a trained guide. Please note that due frequent changes in rehearsal schedules, tours through both performances halls cannot be guaranteed.

PUBLIC TRANSPORTATION: Take the MAX to the Wyandotte and 16th stop or take the Kansas City Streetcar to the Kauffman Center stop (16th & Main).

PARKING: Adjacent to the Center, the well-lit underground Arts District Garage is available for performance events for $7. On non-event days parking is free for the first 30 minutes and $5 for any duration beyond. Valet parking is also available for $17.