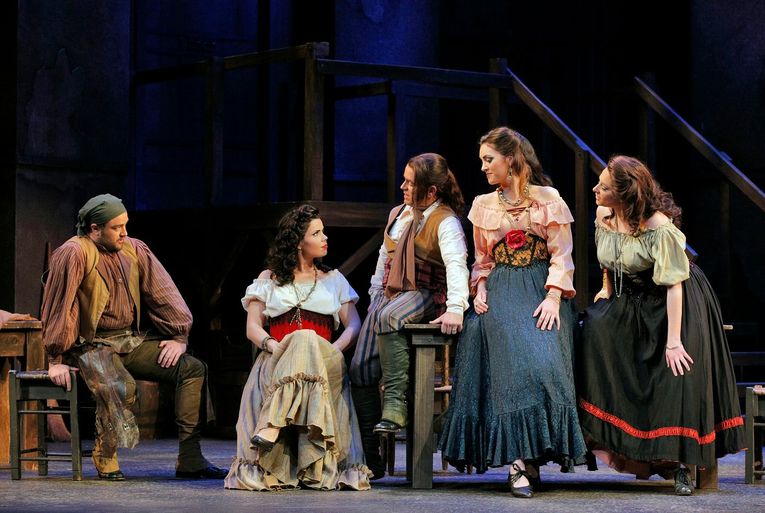 DESCRIPTION: Lyric Opera of Kansas City is one of the nation’s premier regional opera companies. The organization currently performs at the Muriel Kauffman Theatre inside the Kauffman Center for the Performing Arts, the state-of-the art stage for performance art in Kansas City. Lyric Opera brings four high quality live operatic performances to the people of Kansas City each year.

LOCATION:  Located right next to the Convention Center, near downtown and the Crossroads Art District.

ADMISSION: Tickets can be purchased online, by calling 816-471-7344 or by visiting the ticket office.

ANNUAL ATTENDANCE: The opera company entertains more than 22,000 people in its audiences every season.

HISTORY: Lyric Opera of Kansas City began in the fall of 1958 as an “experimental” joint venture between a young conductor, Russell Patterson, and J. Morton Walker, who had been associated with civic operas in Minneapolis and Fort Worth, Texas. Lyric Opera presented its first performance, La bohème, inside The Rockhill, a motion picture theater, as part of a four-week repertory season.

When a fire destroyed the Rockhill during Lyric’s 10th season, the company relocated to the historic Uptown Theatre where it stayed for only two years. In 1970, it moved to its performances to 11th and Central in the then-Capri Theater. During the succeeding years, Lyric presented such contemporary works as The Saint of Bleecker Street, Of Mice and Men, Die Kluge and a world premiere of Captain Jinks of the Horse Marines, along with such established masterpieces as Aida and The Magic Flute.

By 1974, the company had come into exclusive possession of the Capri under a long-term lease, consolidated its offices there, and changed the name of the theater to Lyric. In 1991, the company purchased the theater.

During the 2011-2012 season, the company moved its performances to the state-of-the-art Kauffman Center for the Performing Arts. Today, Lyric Opera brings high-quality, live operatic performances to the people of the Kansas City area and the surrounding five-state region.

WHERE TO GET DINNER: The Crossroads Arts District is just blocks away, full of great dining options before a show. Check Grünauer for authentic Austrian-German delights or Anton’s Taproom, known for  its fresh meats and brews.

WHAT’S NEARBY: Just steps from the Convention Center, Lyric is one of several venues in downtown Kansas City’s theater district. You can also catch performances at Quality Hill Playhouse, Folly Theater, The Midland and Music Hall. After the show, sample some of the downtown nightlife inside the eight-block Kansas City Power & Light District.

GROUP TOURS: Depending on the size of your party and the performance date, Lyric Opera offers a group discount on tickets. For further information, contact the ticket office at 816-471-7344 and request the group coordinator.

PARKING: The Arts District parking garage, immediately south of – and underneath – the Kauffman Center for the Performing Arts, is the primary parking garage for Kansas City Ballet patrons. Event parking is $10 per car and is accessible from the east and south sides of the complex. Additional neighboring lots charge $5 to $10 to park. Street parking is metered but not enforced after 6 p.m., so arrive early to acquire those spots. Valet parking is also available for $18 in advance or $20 at the door. A benefit of being a subscriber is having the option of purchasing a season parking pass that will ensure a space in the Arts District garage. A parking pass with a 3-show subscription only costs $30 ($54 valet) for the season.