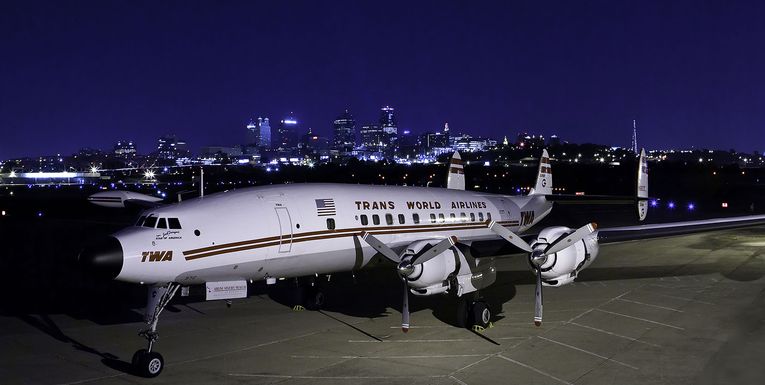 DESCRIPTION: The National Airline History Museum is located at the Charles B. Wheeler Downtown Airport in Kansas City, Mo. To walk through it is to truly step back in time, to a different and more graceful age of air transportation. The museum contains a collection of photographs, artifacts, printed material and audio/visual displays that will bring you the true flavor of an age gone by.

HOURS: 10 a.m.-4 p.m. Wed.-Sat. Closed most major holidays. It is recommended to arrive at least an hour before closing to allow plenty of time to tour the museum and hangar.

HISTORY: The National Airline History Museum was originally known as the "Save a Connie Foundation" and is still incorporated under that name. It was founded in 1986 by aviation enthusiasts Larry A. Brown and Dick McMahon who were joined by a number of other enthusiasts, including (then) current and former employees of TWA, the airline headquartered in KC. The group began by highlighting commercial aviation in the propeller age but has since moved into the jet age with the acquisition of a Lockheed Tristar.

WHERE TO GET LUNCH: Head to the nearby River Market for lots of lunch options. Try Ethiopian cuisine at the Blue Nile Café. Treat your stomach to some slow-smoked barbecue at Winslow’s KC-Style Barbecue.

WHAT’S NEARBY: The museum is minutes away from other transportation-related attractions. For starters, explore Science City and the Kansas City Rail Experience at Union Station. Then tour the Arabia Steamboat Museum where you’ll find hundreds of “touchable” treasures.

DID YOU KNOW: One of the museum’s featured aircrafts, the Lockheed Super "G" Constellation, is the first Constellation ever to be fully restored to flying condition. The plane has been showcased on the airshow circuit and has also appeared in television and movie releases. It was featured in the Arts and Entertainment documentary, “First Flights,” narrated by Neil Armstrong, and in the motion picture, “Voyager.” It got a taste of Hollywood when it was seen in the movie, "Ace Ventura: When Nature Calls" in 1995, starring Jim Carrey.

DON’T FORGET: Take time to see one of the best views in the city. After your museum experience, make sure to look out the south hangar doors for a spectacular view of the Kansas City skyline.

GROUP TOURS: Discounts are given to groups of 20 or more. These visits should be scheduled at least 48 hours in advance.

From the north: Take 169 South, exit onto Richards Road South and follow it around the back of the building beside the levee. It will become Lou Holland Drive and the American History Museum is inside Hangar 9, first on the right as you head north.

From the south: Take US-169 North. Crossing the Broadway Bridge, stay in the left lane. Once over the bridge follow the left lane straight ahead as it drops down into the Downtown Airport. Proceed forward and stay on Richards Road. The road will become Lou Holland Drive and the National American History Museum is inside Hangar 9, first on the right as you head north.

From the east: Take I-70 West to US-169 N. Take the ramp toward Richards Road/Downtown Airport. Turn left on Harlem Road. Take another left on Richards Road. It will become Lou Holland Drive and the American History Museum is inside Hangar 9, first on the right as you head north.

From the west: Take I-70 East to US-169 N. Then turn left onto Broadway Boulevard. Take the ramp toward Richards Road/Downtown Airport. Turn left on N.W. Harlem Road. Take another left on Richards Road. It will become Lou Holland Drive and the American History Museum is inside Hangar 9, first on the right as you head north.

PARKING: Free in the museum lot.